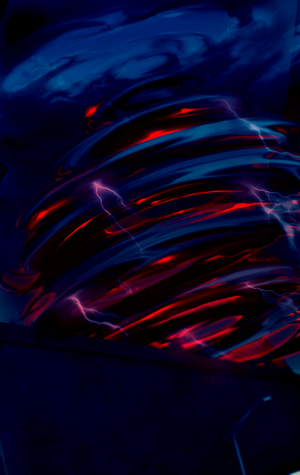 The storm created by the Origin of the Grimoire.

The Wadatsumi Incident was an event that occurred in Shin Yokozaki City 10 years before the events of XBlaze Code: Embryo. It was the result of a failed experiment to create the T-System and took the lives of over 3000 people.

In the Wadatsumi Research Facility, the T-System was being developed jointly by the Takamagahara Organization and the Magic Guild. To accomplish this goal, they planned to open the cauldron in the facility and connect both the Origin of the Grimoire and the Embryo to the T-System.

On the day of the experiment, members of the Ten Sages opened up the cauldron, but had done so prematurely. Ryouko Kagari had also shut down the T-System at roughly the same time. The Origin of the Grimoire went berserk and turned into a massive black storm, presumably using the infinite seithr from the Boundary for its power. This storm engulfed the facility and began to kill the people present. The Ten Sages who were present and the majority of the scientists were killed. Souichiro Unomaru; Ryouko; and Sui Amanohokosaka and her husband were all present during the incident.

Because of internal sabotage conducted by Ryouko and Sui, the damage from the storm was limited to just the area around the facility. The girl who possessed the Embryo at the time, who would later become known as Hinata Himezuru, used her powers to calm the storm. She turned the Grimoire into the form of her friend who had died before the incident - Touya Kagari, Ryouko's deceased son.[1] With this, the storm ended, but tremendous amounts of seithr was still present in the air. Avenge, Sui's bodyguard, found Ryouko as she lay dying. She asked him to save the two children from the facility.

In the wake of the incident, Avenge honored Ryouko's dying wish, and took the girl with the Embryo and the reborn Touya. He forged documents for them both and placed them in the same orphanage as Yuki Himezuru.[2] Unomaru survived by virtue of being in the eye of the storm, but his memories were stripped from him. Thanks to his meticulous notes, Unomaru was able to regain his memory.[3] He then falsified various claims and had Ryouko scapegoated as the perpetrator of the event, tarnishing her legacy. Sui's husband, who was present during the incident, had his soul taken from him, but his body survived. His body was put on life support in the Shin Yokozaki University Hospital.

The Takamagahara Organization dissolved soon after the incident.[4] The involvement of the Magic Guild and Takamagahara was never disclosed to the public. The area that was once the Wadatsumi Research Facility then became known as the Restricted Ward. For unknown reasons, the Wadatsumi Incident caused a surge of new Drive-Unions, especially in the Shin Yokozaki area. To contain the growing numbers, the Mitsurugi Agency directed their efforts towards the capture and execution of Unions.

A horrible disaster that occurred ten years ago in Shin Yokozaki City, in which over 3000 people literally disappeared over night. A black storm erupted out of the blue and engulfed the city. By the morning the place had turned into a ruin. Supposedly the center of the black storm was the "Wadatsumi Research Facility" so people now refer to it as "Wadatsumi".[6]