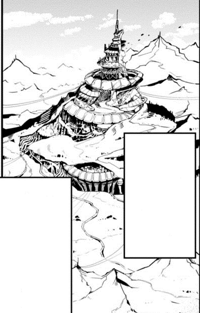 Iwatsuchi seen from an aerial view.

Like other Hierarchical Cities, Iwatsuchi was built some time after the Dark War. It is one of the largest of the Hierarchical Cities, with towering skyscrapers and at least seven districts. As it was the headquarters for the NOL during the civil war, it hosted the medal ceremony for Jin Kisaragi, who was hailed as the Hero of Ikaruga for his efforts during the war.

It was within Iwatsuchi that Meifang Lapislazuli planned to initially kidnap Mai Natsume, but her efforts were thwarted by Kagura Mutsuki and Kajun Faycott.[1]

One of the Hierarchical Cities.

This is the home city of Relius.[2]