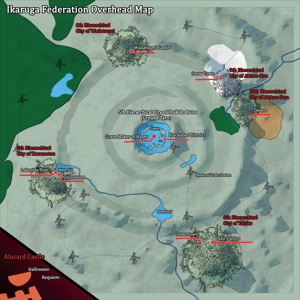 In 2190, the 5th Hierarchical City of Ibukido began to move independently from the NOL. In 2191, Ibukido formed the Ikaruga Federation, forming an alliance with the cities that surrounded it in the Ikaruga Region, and announced their independence. The NOL refused to acknowledge their declaration, and the Ikaruga Civil War began the same year. The federation had links to both Sector Seven and some members of the NOL, with the latter being because of Tenjo's ties.

The Federation had some firepower underneath them. Soldiers were capable of using Ars Magus as well science-based weapons because of their relationship with Sector Seven. One of the stronger forces were the Ikarugan Ninjas, led by Bang Shishigami, a ninja who was personally trained by Tenjo. Tenjo also possessed both the Nox Nyctores - Phoenix: Rettenjo as well as Kushinada's Lynchpin. If used together, Tenjo could have siphoned the world of all its seithr but she was reluctant to do so because of the implications - neither the Federation, NOL, or Sector Seven was truly aware of this last ditch plan. Sector Seven's provided firepower also included the purchase of mercenaries, such as Bullet's Mercenary Squad.

The federation was led by Tenjo Amanohokosaka, the former Imperator of the NOL who had been ousted from her position by unknown means. As no one knew the identity of the Imperator, bar the heads of the Duodecim, few members of the NOL were aware that their enemy was once their leader. The war was started to eliminate Tenjo and to also act as a smokescreen for multiple experiments that would attempt the creation of either a Kusanagi or a Black Beast.[2] 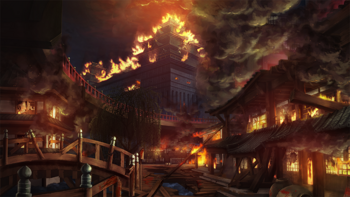 The end of the Federation

Despite valiant efforts to fight against the NOL, it was obvious to any outsiders that the NOL was just playing with the Federation. The Federation's numbers and firepower paled in comparison to the NOL's, even with Sector Seven's support. On the 25th of December, 2194, the Takamagahara System fired the Gigant: Take-Mikazuchi on Ibukido, destroying the world's largest city in an instant. This signalled the beginning of the end for the Federation as one of their greatest assets was obliterated. In 2196, they attempted to negotiate for peace with the NOL, but their offer was rejected and the war continued. Kazamotsu and Yabiko had also fallen to the NOL's superior might.[3] Wadatsumi was the Federation's last stronghold.

When Tenjo was assassinated by Jin Kisaragi and Wadatsumi was razed to the ground, the Federation surrendered as all their soldiers lost the will to fight.[4] Bang evacuated as many former Federation members and Ikarugan citizens as he could to the 13th Hierarchical City of Kagutsuchi. The district of Roningai was made by these refugees. In the time following the end of the war and the Federation's dissolution, the Ikaruga Federation became an icon of the suffering of the Ikarugan people as well as a historical reminder for the strength of the NOL.

It was destroyed during the Ikaruga Civil War between 2191 and 2197. Scars of the civil war remain in all lands even to the present day, except in Yabiko, which was the center of restoration efforts. The center of the explosion that occurred in the 5th Hierarchical City Ibukido remains sealed off, and the land is unused. The head of the Duodecim's Mutsuki family, 'Kagura Mutsuki', is currently leading the reconstruction efforts.[6]