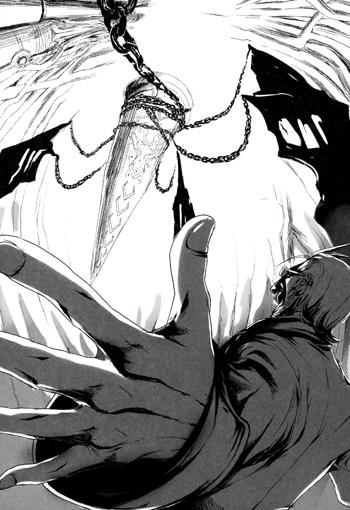 Kushinda's Lynchpin (クシナダの楔 Kushinada no Kusabi) is a device that was created by Shuichiro Ayatsuki. It is a large nail that can completely nullify seithr, and a strong soul with control over the flow of life is required to activate it.

Before the beginning of the Dark War, Shuichiro made Kushinada's Lynchpin as his ultimate device, designed to be able to stop the flow of seithr from a cauldron. He made the Lynchpin with the hopes of being able to best Relius Clover and as a fail-safe to stop anything that may have been born from Relius' and Yuuki Terumi's research into making a Kusanagi. With the birth of the Black Beast, the Lynchpin nearly saw use as it could stop the Beast for, at least, five years, giving mankind enough time to fight back. Nine the Phantom would not allow this, however, as the soul of Celica A. Mercury was required - the soul of Shuichiro's own daughter. After fighting with Jubei over the fate of the Lynchpin's activation, they agreed to not use it. [1]

Nine would still use the Lynchpin for her own uses. When creating the Deus Machina: Nirvana, she made its nails out of parts from the Lynchpin [2], and she even made the Nox Nyctores - Phoenix: Rettenjo out of the core of the Lynchpin itself. After the end of the Dark War, Kushinda's Lynchpin went missing, and was found to be inside the 8th Hierarchical City of Wadatsumi under the watchful eye of Tenjo Amanohokosaka who refused to use it during the Ikaruga Civil War even though it would have secured her victory. [3]

After the way, only Kagura Mutsuki was aware of its location, and sent Bang Shishigami to protect it in the February of 2200. Eventually, Noel Vermillion, Ragna the Bloodedge, and Celica found the Lynchpin under Wadatsumi. With Bang, the four of them fought over the fate of the Lynchpin against Relius Clover, Ignis Clover, Nu-13, and Litchi Faye-Ling. [4] The battle ensued further when Ex Machina: Minerva, Izayoi, Carl Clover, Nirvana, and Makoto Nanaya joined the battle over its fate. The battle was a stalemate until the arrival of Valkenhayn R. Hellsing, who stopped the incredible tag-team between Ignis and Nirvana. Rachel Alucard teleported the Lynchpin above the Monolith in the 5th Hierarchical City of Ibukido with Bang on top, and he nailed the Rettenjo into the Lynchpin, activating it with Tenjo's soul and stopped the flow of seithr in the world. [5]

In the world without seithr created by the Lynchpin, the Amaterasu Unit chose certain individuals and granted them the use of Ars Magus, these individuals being called the chosen. Inside the Embryo and the new world created by Ragna, the tip of the Lynchpin is still within Ibukido with the Rettenjo nailed on the top.

However, in order to function, it requires a living organism to become its core. Unfortuntely, the Lynchpin's effect would end when the organism's life ends. Furthermore, once driven into the Boundary, it would be impossible to locate or retrieve, making it limited to a single use.

Its location is unknown at present. Relius Clover is searching for it, but Yuuki Terumi says he doesn't know where it is.

The Lynchpin requires the 'soul' of a human who has the 'power to manipulate life energy' to activate. In other words, Celica's soul was thought to be required, but it was successfully activate using the soul of Tenjo resting within the Lynchpin's core, the 'Phoenix: Rettenjo'. This caused the activity of Seithr throughout the world to stop completely. [6]

The lynchpin takes its name from Kushinada-hime, the wife of Susano'o-no-Mikoto. She was a maiden who's siblings were killed by the Yamata-no-Orochi, and became a linchpin for Susano'o's hair when he agreed to keep her safe and to slay the serpent that had terrorized her family.