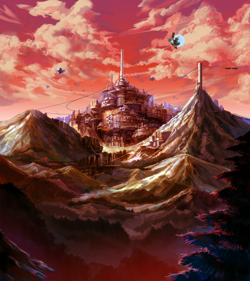 The 13th Hierarchical City of Kagutsuchi

The Hierarchical Cities are a group of 23 different cities created by the Novus Orbis Librarium in the aftermath of the Dark War. The majority of the world's population reside within these cities.

Despite not being created by the NOL, the Magister's City of Ishana is considered the 0th City of Izanagi.

When the Dark War had ended and the Black Beast had been slain, from its body, seithr spewed outwards and covered the planet in its toxic substance. In order to survive, the NOL created the Hierarchical Cities atop different mountains across the world. Each City follows the same basic plan: on the top of the city resides the NOL branch; higher levels house NOL officials and the upper class, and lower levels are inhabited by poorer citizens. These districts are layered on top of each other as individual plates, held together by a main shaft.[1] Each city holds a cauldron deep within, with the only access being through the NOL branch.

Each Hierarchical City is massive in size, with multiple districts, each of relative size. Because each City is atop a mountain, Ars Magus is used to regulate the weather to habitable degrees. This Weather Control Device corresponds to a cauldron and a Regulation Grimoire to function, and without either, it crashes, sending a City back to its naturally mountainous state. [2] As Cities are so large, a Gear-type Elevator is used to navigate across the multiple levels - the 15th Hierarchical City of Torifune is said to have the best one across the cities, while the 13th Hierarchical City of Kagutsuchi has a more rundown version; in the cases where the elevator does not reach a district, there are long sets of stairs.[3] The numbering of a city does not reflect how big it is, as the 5th Hierarchical City of Ibukido was once the largest of all 24.

All cities are named after various Japanese Gods.

Due to the large amounts of Seithr spewed forth from the 'Black Beast' covering the surface, humanity had to build cities and live in high altitude, mountainous areas.

The upper level contains the Librarium branch office, while the higher levels are reserved for the wealthy, Librarum personnel, and collaborators. The poor, refugees, and other indigenous races live in the lower layers.

Movement in Hierarchical Cities is the same regardless of the city, utilizing Gear-type Elevators. Like most everything else, they are based on Ars Magus.[5]