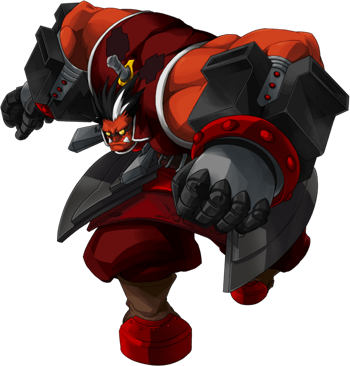 Iron Tager, the first to be equipped with an Artificial Causality Phenomenon Weapon.

Artificial Causality Phenomenon Weapons () are a series of weapons made through science that were designed by Kokonoe to match the combat capabilities of the Nox Nyctores. The successor to these artificial weapons is the Idea Engine.

During the Ikaruga Civil War, Kokonoe needed a power source to fuel Iron Tager, but had little options. She deployed Kajun Faycott to the 15th Hierarchical City of Torifune to find the Burning Red Grimoire, which could be used as a source, but the mission was unsuccessful.[1] Forced to find an alternative, Kokonoe used data leftover from the Deus Machina: Nirvana, a Nox which Sector Seven had recently acquired through the Phenomena Weapon Dispossession Operation. With this data, Kokonoe was able to create the first Artificial Causality Phenomenon Weapon, which was outfitted on Tager. Nirvana was later lost after Relius Clover had orchestrated a Novus Orbis Librarium attack on the Sector Seven facility housing Nirvana.[2]

Years after the first weapon was created, Kokonoe began creating the Idea Engine, its successor. While Nox Nyctores are stronger than any Artificial Causality Phenomenon Weapon, the latter are more stable and have no impact on the user's mentality. As well as this, it avoids the heavy ethical problems that are caused by Noxs, which are fuelled by souls. With enough output, someone with this weapon can create an Eclipse Field or even use mechanical teleportation, but additional equipment is required.

Arakune was later outfitted with an Artificial Causality Phenomenon Weapon by Relius to amplify the creature's power.[3] Relius later based the Detonator line of weapons off the artificial weapons created by Kokonoe, adding his own modifications that allowed them to fight evenly against Noxs.

Weapons created by Kokonoe. Tager is equipped with one based off Nirvana.

Unlike the Nox Nyctores, which are living weapons, these are built mechanically, making their power lower than that of a Nox Nyctores, but also more stable. Also, there was one loaded onto Lambda.[5]