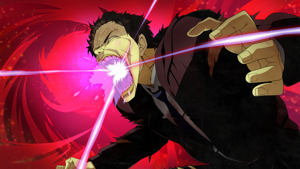 Union (ゆにおん), also known as D-Infected Patient (Ｄ発症者) is a term introduced first in XBlaze Code: Embryo. It is used to identify those who are able to use a Drive. The first Union target introduced was Goro Joizumi, using the Drive Screaming Jaw.

The victims create a growth called a Crystal, which slowly corrupts their mind, and makes them more aggressive. They lose the ability to differentiate between friend, and foe, and their behavior becomes akin to a wild beast. Furthermore, the infection evolves through six phases, identified as Phase One, to Phase Six.