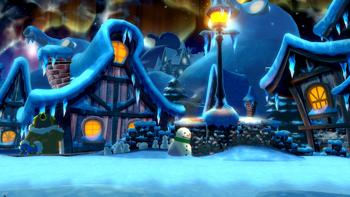 During the events of Memory of BLUE, Ragna the Bloodedge infiltrated Akitsu's Novus Orbis Librarium branch, earning him the moniker Grim Reaper.

Akitsu-Kou is described as an unremarkable city with no outstanding features.[1] Like other Hierarchical Cities, the NOL branch is ornately decorated and stands taller than the other buildings in the city. There are five gates that serve as entrances into the city, with the smallest being known as the 'back door' as it was located the furthest from Akitsu-Kou's downtown; it was often used by travelling visitors. Towards the 'back door' is a series of complex, almost labyrinthine alleyways that were developed as a part of poorly planned growth within the district.

Ragna the Bloodedge laid waste to Akitsu-Kou's Cauldron sometime prior to 2200. Because of this, the weather control system for the city was deactivated and the city reverted back to its natural mountainous state. The city is now covered in snow, ice, and has a climate that can be expected in higher altitudes - this is best exemplified by Snow Town.

Residents have adapted to the change in temperature by building igloos and snowmen, and having snowball fights. Far above Akitsu-Kou is a clearly visible aurora.