Alchemy (錬金術 Renkinjutsu) is an Art that is applied in making bodies, souls, and objects more perfect. 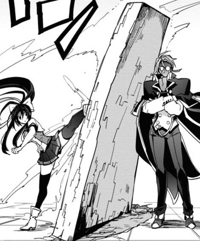 Alchemy can be used in combat.

Alchemy is one of the three lost Arts alongside sorcery and magic, having been primarily practised in the Mage's Guild. Being part of its curriculum, all students were taught the Art while it also remained a key component in the selection of one of the Ten Sages. After the Dark War, alchemy users became much rarer across the globe with most of its knowledge being lost.[1]

Despite having been considered lost even by Kokonoe, the study of it was ventured into by several scientists, namely Lotte Carmine and Cypher Albar. The latter was considered a great master of it and was hired by the Novus Orbis Librarium to teach it to the students of the Military Academy. According to Chachakaka, alchemy has a very distinctive taste.[2] The entrance to Nine's laboratory was guarded by several keys, one of them needing to be a key made with the blood of a Mercury. Trinity helped instruct Kokonoe to construct this key with alchemy.[3]

In combat, alchemy is fully applicable, having been used by Cypher to fight Mai Natsume. It is possible for a practitioner to create large columns of earth without exerting any movement, or even turn simple metal railings into a myriad of spears.[4] Alchemy only seems to manipulate the environment around the user, not being able to create new objects or be used to create spells. There are also no incantations required, seemingly no casting time, and no charms or grimoires needed. To those with complete mastery, there are techniques similar to teleportation, a technique almost exclusive to sorcery and science, and the ability to enchant objects which can send wearers into a catatonic state.[5]