Memory of BLUE is the short story of Ragna the Bloodedge in the BlazBlue Material Collection. It details Ragna's destruction of the Novus Orbis Librarium branch in the 9th Hierarchical City of Akitsu-Kou.

The 9th Hierarchical City "Akitsu" was an extremely unremarkable city lacking any especially noteworthy features. A few days earlier, Ragna the Bloodedge had showed up in town. And on this day, he was waiting for midnight, when everyone would be fast asleep, to make his move. Ragna's objective was the largest building in the city—the NOL branch. Fleet-footed and free from prying eyes, he tore through the night down Main Street, and before long caught sight of a massive building that soon dominated his field of vision. Ornately decorated, it was far more impressive than the bureaucratic public offices. He briefly paused before the Library's vaunted "dignity and perfection personified". Glaring up at the building, Ragna angrily clicked his tongue.

"The area up ahead is restricted. Turn back immediately."

The masculine voice boomed through a speaker installed on a streetlight. The front gate was still a hundred meters away. When a man carrying a "huge weapon" appeared out of the night and began to approach him, there was no mistaking it for anything other than a warning...

Ragna ignored that warning, and without batting an eyelash, kept right on walking.

"Halt! Come any closer and you'll be considered an intruder, subject to removal by force!"

Taking on a stronger tone, the voice again called out from the speaker. In spite of this, Ragna's pace remained the same.

The masculine voice became an angered roar. A moment later, a trap was triggered, emitting a dull and persistent noise throughout the vicinity. This trap, designed for protection against demonic beasts, could instantly vaporize an ordinary man. The safeguard, however, was powerless against Ragna. With a casual wave of his right hand, the trap dispersed like a burst bubble. The voices of confused guards danced around him, followed by the piercing echo of an alarm.

The main gate was right in front of him—but there, Ragna came to a sudden stop. The praetorian guard had heard the commotion and alarms, and in less than a minute, dozens of armed personnel had assembled. Identical blue uniforms lined up in a row. With a flash, Ragna's mouth twisted into a fearless grin.

He gripped the great sword worn across his lower back and settled into a battle stance. It was a stance that gave him the appearance of a poised gunslinger. The armed personnel responded in kind by targeting Ragna and training their weapons on him.

Suddenly, a dreadful flash and thunderous roar ripped through the area, blowing away the gate and taking the armed personnel with it. Raising an eyebrow, Ragna stepped over the wreckage of the main gate, leisurely infiltrating the NOL building's interior.

Advancing straight up a ramp, he reached the staircase connected to the main hall. There, more than a hundred armed personnel fully prepared for war already awaited him.

Ragna slowly surveyed the faces of the armed personnel. Taking a deep breath, he sliced into the crowd of enemies without hesitation.

It was like someone painting a landscape of hell. With his eyes flaring bright, Ragna brandished his massive blade. An Armagus erupted through the building in all directions. Swords rang out. Chaotic screams, shouting, and the agony of death. Making no distinction between men, women, or those trying to escape, he cut every last one of them down. There would be no mercy from Ragna. He no longer recognized his foes as "human". Garbed in those unsightly "blue uniforms", they were the "Azure" which he hated.

The battle gradually took on the aspect of a one-sided slaughter...

Several minutes after the furious conflict — or rather, the massacre - Ragna was in the deepest part of the NOL building.

Each NOL branch conceals an unimaginable, bowl-shaped room underground. Gold and blue lights traced mysterious geometric patterns, boasting a majestic beauty. He jumped into the depths, sliding down toward the "Gate".

Turning away from the Gate, he sprinted up the interior of the room and easily leapt back to the ledge. He then looked down toward the bottom again.

He raised his right hand just like before, and it became enveloped in a blue-black light, which gradually increased in size. With an abrupt and forceful thrust, Ragna launched the blue-black light forward. In the next instant, the Gate was blown into pieces with a resounding crash. The impact sent out a ripple of shockwaves from the center of the Gate. With the parts falling away one at a time, the miniature garden collapsed.

The NOL branch, which was said to have enough military power to rival an entire country, was destroyed at the hands of just a single person on that night.

Ragna walked down a dim, narrow alley. He was making his way towards the fifth of five gates found in the 9th Hierarchical City. Of the five gates, it was the smallest, and was also located the furthest from downtown. It was commonly called the "back door", and was frequently used by traveling visitors for that reason. He was through with this city. Having achieved his goal, Ragna just wanted to get out of the city as soon as possible.

As he neared the gate, he left the alley and entered another long, slender passage. The labyrinthine streets appeared to repeat over and over again, a result of unplanned growth in the district.

It must have been a much lower level—and the scarcity of streetlights made it even darker. The seithr levels were out of balance as well, and it seemed there was a problem with the air-conditioning. The damp air clung to Ragna's body. He gnashed his teeth at the gap between this and the upper district of the NOL branch.

At the same time, Ragna suddenly felt a gaze fall upon him and stopped walking. He squinted, peering into the darkness. 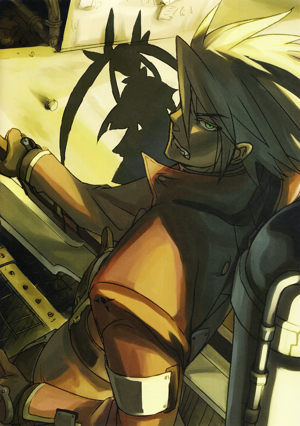 There, on the roof of a building, stood a maiden in black. She looked like a black rabbit holding a black umbrella in a black void. The rabbit was sitting on something like a big, rubber ball, watching Ragna. Her backlit expression was unclear—the only clear thing about her were the two cold, crimson eyes floating in the darkness. Ragna returned the young girl's glare with contempt, his own eyes tinged with a shade of bloodlust. With her eyes still trained on Ragna, the girl raised an eyebrow. She continued to stare at him through those red eyes, like a pair of glass beads, without blinking.

Annoying. Black and annoying. Ragna finally averted his eyes from her and started walking again, ignoring her completely. Then the young lady, who had surely been standing on the roof mere moments earlier, appeared right before his eyes. Ragna, unsurprised, brushed right past her.

As he passed, her porcelain doll lips moved.

Ragna's steps stopped, his expression shaded with anger. The girl watched Ragna patiently, returning his look without hesitation. The tension between the two could have been cut with a knife. It seemed as if the moment stretched on for a terribly long time, then ended with a graceful gesture from the young lady.

Abruptly, she had raised her right hand and moved it horizontally. Pointing to the northwest, the black rabbit—with a firm tone—whispered, "Kagutsuchi." Ragna couldn't make out the intent behind the young lady's words, and stared at her once again, with a dubious expression.

In the next instant, the girl was floating, drifting up into the sky. Just before the rabbit's silhouette against the moon faded away like fog, she looked down at Ragna and whispered something.

Ragna lightly clicked his tongue. The girl's voice continued to echo in his mind for a long time.

Ragna's right arm had grown hot... The air, heavy with humidity, seeped into his lungs as the back of his heel passed through the gate. Shortly after, he became known as the "Grim Reaper".[1]