BlazBlue Alternative: Dark War is a mobile game for iOS and Android systems. [2] A companion promotional webcomic, BlazBlue Walker, was serialized with biweekly releases between Jan 11, 2018 and August 29, 2018. On Jan 17, 2021, the official BBDW Twitter account (@BBDarkWar) began making posts under a mascot character, Twikaka, and releasing a continuation of BlazBlue Walker under the name Introducing BlazBlue Alternative: Dark War with weekly chapters every Saturday.

This is a story of arriving at the Azure.
Taking a step away from natural peace,
The world starts to end...
The hell known as possibility begins.[4]

After the initial announcement of Dark War in August 2017, MORI Toshimichi, the producer of the BlazBlue series, began occasionally posting teaser sketches on Twitter. The initial promotional website for Dark War included music, the Dark War logo, and two pages of a prologue.

On January 11, 2018, the game's official website was updated with a short pitch for the story and an image and short description of Ciel Sulfur. [5] The first episode of BlazBlue Walker was also released, to serialize on a biweekly schedule. Preregistrations opened on February 14, 2018, accompanied by a website update that added images and descriptions for both the male and female protagonist, as well as six other returning characters (Kazuma Kval, Trinity Glassfille, Jin Kisaragi, Noel Vermillion, Tsubaki Yayoi, and Bullet) alongside Ciel Sulfur. The Dark War logo was also replaced with a splash image featuring Raquel Alucard, Trinity Glassfille, Kazuma Kval, Jin Kisaragi, and Trinity Glassfille.

Originally planned for a 2018 release, the game was quietly delayed at the end of 2018. In May 2019, at a panel at MCM London, Mori confirmed the game was still in development. At this panel, Dark War's story was stated to be a prologue to BlazBlue. Gameplay was revealed to include teams and equipment, and that combos would form a major part of the gameplay.[6]

Dark War was also touched upon briefly in the BBCFMC's included interview with producer Mori-P. It would have branching choices similar to those of the XBlaze series, featuring a single main story with branching sub-stories. The short stories would feature characters whose stories were cut or could not fit into the main series, with Mori-P mentioning Hazama, Platinum and their relationship to Bell, Bullet, Hibiki, Meifang, Houichiro Hazuki, and characters that he personally would like to spend time writing about.[7]

January 13, 2021, the game's Reboot PV was released and its release date announced for roughly February 2021 on ArcNama.[8] 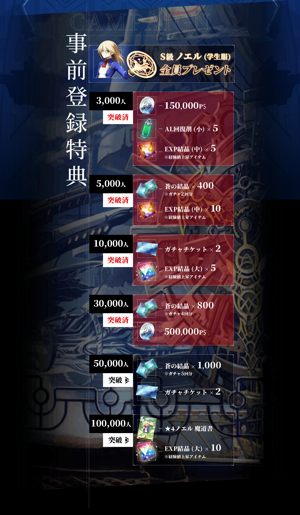 After September 22, 2021 it will not be possible anymore to receive the pre-registration rewards. Most of the rewards will be available in beginner-only missions instead.

Although it was not a milestone on the step-up campaign, the official twitter reported pre-registrations surpassing 20k on July 4, 2018 along with the release of Rebel.14 of BlazBlue Walker.[15]