In Sept 2017, a regularly broadcast version of ArcNama (あーくなま定期便 Ākunama Tēkibin "Regularly-Scheduled ArcNama") began to be held on the third Friday of every month, primarily to release news for BBTAG with the pacing of one set of characters per stream. Even after the release of BBTAG and the reveal of the last of its DLC roster at Evo 2018, the regular stream continued to be held every month with news about other ASW games. ASW also began streaming on Twitch simultaneously with NicoNico with the advent of the monthly ArcNama. 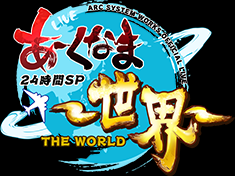 On April Fool's Arc System Works held a 24-hour livestream, continuing their tradition from 2017; titled ArcNama 24hr Special ~THE WORLD~ (あーくなま 24時間ＳＰ『THE WORLD～世界～』), the theme of the livestream was ~THE WORLD~ (THE WORLD ～世界～)

It was announced during the March episode of ArcNama Regular Broadcast, where it was revealed the stream would be 24 hours long, starting and ending at midnight JST, and be streamed on NicoNico. A mystery RPG project to be revealed during the 24-hour livestream was teased with a new website, later announced to be Wizard's Symphony.

From the NicoNico livestream description:[1]

[Livestream Summary]
It will be held this year as well! Arc System Works will broadcast a 24-hour livestream! This year's theme is "the world!" This [...] broadcast will be brought to everyone around the world!

[Summary of Plans]
Withstanding 24 hours as a team for mahjong!
Can it be completed? A 4000 piece jigsaw puzzle!
Opening applications this year as well! Fan letters!
The voice actor ICHIKI Mitsuhiro and Ozawa's decisive match will be!? The plan is to have it within these 24 hours!

[Read This Part Too]
The official site for the mysterious game is now open!? During the broadcast at irregular times, keywords will be distributed that will allow you to obtain "Shinyokoins!" Don't miss ArcNama 24-hour Special ~THE WORLD~!

[Mail Form]
Please send your 24-hour livestream fan letters to https://business.form-mailer.jp/fms/7de1de1484874!
※ They will be received after the livestream begins.

※Caution※
This broadcast's contents and plans can be changed without warning.

Arc: Global Operation (AGO) was a browser game available to play at http://www.arcsystemworks.jp/arcglobaloperation_april/ for the duration of April 1, 2018 only. Its layout parodies the popular mobile RPG, Fate/Grand Order, but the game itself only contains a lottery ("gacha") from which cards of rarities from 1 star to 5 star can be pulled.

At certain points during the livestream, the hosts would pull a ball from a capsule machine containing a keyword that listeners could input into AGO to gain Shinyokoins (しんよコイン), a play on the words "Shinyoko" (the location of the ASW office) and "coin". Shinyokoins could be used to pull the lottery at a rate of 3 Shinyokoins per pull, or alternatively 30 Shinyokoins for ten pulls at once.