Author: Mako Komao
Illustrator: Yuki Sugiyama
Synopsis: Rachel, who awakens from her long sleep within her castle. A completely changed world that has lost all order and a promised reunion awaits her.
Translation: Chao
Editing and proofreading: Pin
Illustration scanned and cleaned by: Astraea

The unchipped, round moon blazes brightly, floating in the endless night.

Undescribably crimson, the moon looks down upon a sprawling rose garden and, at its center, a towering castle with a pointed roof.

The solemn, ornate Alucard Castle. In one room of that castle, on a large and luxurious bed, sleeps a single girl.

With hair so gold it seems to glitter, and skin so pale it seems transparent, the girl bears a cold, cold beauty like that of an exquisitely crafted doll.

She has already slept for several decades--in order to regain her lost power; in order to obtain great knowledge. And above all, to prepare for what is coming.

With her lips closed firmly and her eyelids not fluttering in the slightest, it seems as though her sleep will never abate. Until today.

Faintly, truly faintly, the scent of roses drifts in on a breeze that lifts the girl's evenly-cut fringe. Absorbing that breeze, a rosebud resting in a vase near the window begins to give off a soft scent. As if drawing a breath, the petals unfurl like lifting aside the hem of a dress; the crimson flower blooms gracefully. 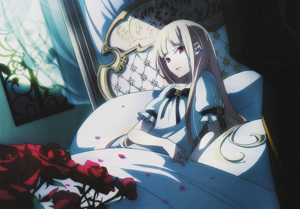 At the same time, framed by long eyelashes, the girl's eyes open. With irises of deeper crimson than the red of roses, still clouded with sleep, she glances at her surroundings.

Her chest rises and falls with a deep breath, her long, gold hair sliding across cloth as she lifts her body and calls out.

Just as they had been before her slumber, an elegance and refinement unexpected of a young girl are evident in her voice as she calls for her butler, as time within the Alucard Castle begins to move once more.

Rachel, having changed into a white negligee and black dress, is having her hair brushed with a high-quality brush.

During the decades that Rachel slept, he stayed by her side and watched over her slumber, leaving not even for a moment. Alone, he cared for her beloved castle and rose garden. And more than anyone, he had waited for this moment.

"How are you feeling, Madam Rachel?"

While brushing her hair, he poses his question in a stern yet kind voice. Rachel responds, looking straight ahead.

"Not poorly. Although my head hasn't quite cleared yet."

"Shall I brew some black tea for you later?"

Valkenhayn gathers Rachel's hair into his hand and ties it with a black ribbon. The ribbons stand upwards, resembling rabbit ears.

After he continues on and ties the right half of her hair, Rachel's long-favored hairstyle, twintails, is complete.

She combs through her hair with her fingers, the slightest of satisfied smiles floating at the corners of her mouth, and looks up at the loyal butler standing at her back.

"As embarrassing as it is. It's been more than half a century since Milady fell asleep."

Valkenhayn is no normal human, but a demi-human bearing a longer lifespan than that of humans: a lycanthrope. Of course, compared to a vampire whose lifespan can exceed a thousand years, it's considered short. His hair, which had been tea-brown before Rachel's sleep, has now faded to white, and his skin creases with an increasing number of wrinkles.

Even as the vampire's appearance remains unchanging, the lycanthrope's appearance withers. For even this trivial amount of time, the world continues.

Valkenhayn's outer appearance is not the only thing that has changed with time.

While preparing black tea for Rachel, who is now at the terrace, Valkenhayn speaks of the movement and change in the world.

Rachel had fallen asleep immediately after the end of the Dark War between humanity and the Black Beast. In the aftermath, much was lost, and much was gained; many were killed, and many were born.

The order that the world had cultivated until then was lost. In exchange, a new order formed as new cities rose up across the world. The world, now filled with seithr, caused Ars Magus, which used seithr, to become widespread. At the same time, those in the lowlands died as the area became uninhabitable with that very same seithr. The divide between the rich and the poor was born. Lives were lost; conflicts and scheming continued.

But even so, in this world, humanity lives on.

"...I see... I've asked you to recall something terrible, Valkenhayn."

Rachel had listened quietly while drinking her black tea. Now, she gently lifts the cup and speaks as if whispering into it.

Because, hidden behind the flourishing history of humanity was the disappearance of the Six Heroes who fought on the frontlines of the Dark War.

Of the six, two were murdered by one of their own, who then disappeared with a fourth member, leaving behind only the cat beastkin Jubei to pass along this news to Valkenhayn.

However, at Rachel's words, Valkenhayn shakes his head.

"My duty is to protect Milady."

No matter what happens, he does not have the freedom to abandon that duty.

Valkenhayn speaks in a gentle manner, but lowers his voice and continues with a slight hardness to it.

"...There is still one more thing that I must tell you."

Lifting her chin, Rachel stares up at Valkenhayn. Noticing a slight unease within his master's glittering gaze, Valkenhayn answers heavily.

"We've found Relius Clover. Currently, Jubei is in pursuit, tracking his movements.... We think that he's attempting to make contact with the Boundary again."

The Mad Puppeteer, Relius Clover. He was involved in the appearance of the Black Beast, and, going further back, was said to be an acquaintance of Rachel's father; neither Rachel nor Valkenhayn expected that they would once again hear his name in this age.

Or perhaps, it was something they didn't want to consider.

Rachel looks down at the roses from the terrace. To her, hearing that name is neither karma nor fate. It simply carries an overwhelming sense of unease.

A short while before this, Jubei had successfully discovered Relius's workshop--along with three children, who he rescued. Those children currently live at a church under the care of a specific woman.

After hearing this from Valkenhayn, Rachel leaves the Alucard Castle for a dark and verdant forest.

Normally, she'd use teleportation magic to travel anywhere instantly, but her destination this time has a powerful barrier that prevents her from directly teleporting there. Therefore, although she was able to teleport to this forest, she now has to travel the rest of the way by foot.

Or so it seems, but Rachel calls up a wind, which carries her so that her steps barely touch the ground.

She notices them while she steps softly through the forest, stops the breeze, and hides herself in the shadow of a tree wrapped in ivy.

The presences and voices of people draw near.

There is still quite a distance between her and the church, and no one lives within the forest. Therefore, it is easy to identify who is coming.

The shadows of three people pushing their way through overgrown grass appear before her. They're small shadows; they can only be the three children.

At the head walks a boy wearing a very determined look. He carries a small girl on his back, and a tired-looking young boy follows behind them. All three have blond hair and green eyes. Close siblings, or so it seems.

Together with the three children is an elderly lady in nun's clothing: the Sister who protects the church.

The four seem to be looking for something, as they search their surroundings while delving deeper into the forest.

Rachel watches their forms closely from the shadow of the tree.

The three children that Jubei had taken. Who they are and what they are, Rachel already knows.

Perhaps, even the fate that they would follow from this point on.

It would certainly be a fate neither kind nor comfortable. Rather, it would be one that piles up suffering enough to rend one's heart.

But even knowing all this, Rachel can do nothing except watch--exactly how she currently does.

The girl has suddenly looked over her shoulder in the wrong direction, and the boy carrying her raises his voice.

She looks into the depths of the thicket, towards the area where Rachel is hiding. However, this does not mean she has seen Rachel; only that she has sensed some sort of presence.

She only turns her gaze away after the boy claims she probably saw a rabbit or something, and they continue deeper into the forest.

Rachel watches only that boy as they disappear from sight. Like the moon high in the sky, watching over humans as they crawl like worms across the earth, she watches.

However, she is no moon. Crimson eyes trained on the back of the determined boy as he disappears further into the forest, her voice escapes in a murmur.

"I wonder what sort of ending you will show me this time... Ragna."

This expresses her expectations, as well as her understanding of the truth. And yet, it is also neither, but a more muted feeling... an incomparably heavy feeling.

No matter what words are used to describe it, time moves and fate begins.

Lowering her gaze, Rachel calls up a wind and disappears from the forest, filling it with the scent of roses. She has seen enough. She was able to confirm that the actors were neither lacking nor excessive.

After this comes the ending of the prologue, and then the wait for the curtains to rise.

Surely, this story will begin once again with the sound of roaring flames...[1]