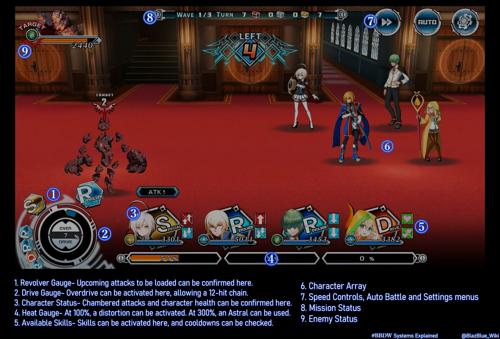 A breakdown of the elements of the battle screen 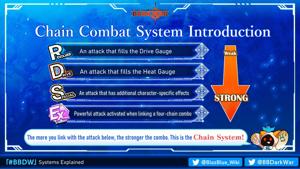 There are four basic commands and two additional commands that use the Heat Gauge.

The combo system allows commands to be chained together in a pattern of R > D > S or by repeating the same type (D-D-D) up to a maximum of 4 commands. The fourth command will be automatically converted to a special EX type. By chaining commands, the subsequent commands get stronger; however, consecutive attacks from the same character will be slightly weaker than attacks chained between different characters.

An example of chaining commands in Overdrive.

When the Overdrive Gauge is filled, Overdrive can be activated. During Overdrive, the combo limit is increased to 12 and commands can be linked in any order. The limit can be increased by character's passive skills and grimoires.

Auto can be activated in the upper right corner. It uses all characters skills, performs chains, and will use Overdrive, Distortion Drives, and Astral Heats as they become available.

Auto will prioritize characters' commands based on character role: Attacker over Supporter over Healer over Tank.[1]

In the Settings menu you can adjust the AI behavior if they should use skills, Distortion Drives, Astral Heats and prioritize elemental weakness over character roles.

For a list of all characters, see Characters (BBDW)

Characters can be pulled from the gacha at a base rarity of AII, A1, S, or SS and can be upgraded to higher rarities. All characters can be raised to the highest rarity, SS+++.

There are 7 rarities total:

The number of pieces required to ascend to the next rarity are as follows:

Grade is shown below the character's status on their profile as a row of ten circles. There are ten grades from 1 to 10, and it caps the maximum level of skills one-to-one. That is, if the character's grade is 3, then all of their skills can only be raised up to level 3.

Grade can be increased by equipping on the character a type of equipment called orbs. Each grade requires six orbs, and the type of orbs needed differ based on the character and grade. When all six of the current grade's required orbs are equipped, the character's grade will automatically increase by 1.

Limit-breaks are indicated by a bronze, silver or gold crown on the character's profile. A limit-break increases the stats and drops of event currency items when the character has a drop bonus.

By obtaining a duplicate character in any way they will automatically receive a crown. With

The number of Exceed Emblems required to limit-break are as follows:

A skill is an ability that can be activated during battle. Each skill has up to ten levels and can be leveled up, or strengthened, using Platinum dollars (P$). Leveling up a skill increases its potency, the effect of which differs based on each character. Character skill levels are capped by the character's grade one-to-one.

A trait (特性 tokusei) is a passive effect that takes place when its conditions are met. Some traits do not have conditions and are therefore always active.

Finally, characters can belong to a number of groups (系統 keitō). These are listed at the very bottom of the character's profile. A full list can be found On this page

Grimoires are able to be equipped on the party position screen and apply specific effects to the wielder.

All characters have one of the six elemental attributes: fire, wind, earth, water, dark, or light. Each element has strengths and weaknesses relative to others. They're shown in the table below with the strength of column elements being relative to the row elements (read top to bottom).

e.g.: Fire is strong against wind and dark but weak against water and light.