The gacha is a method of obtaining gacha-exclusive characters and grimoires. 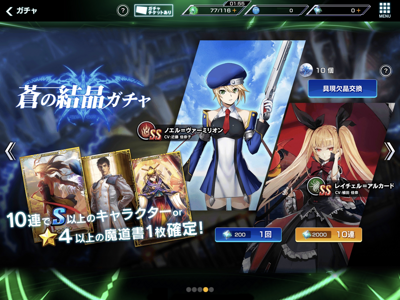 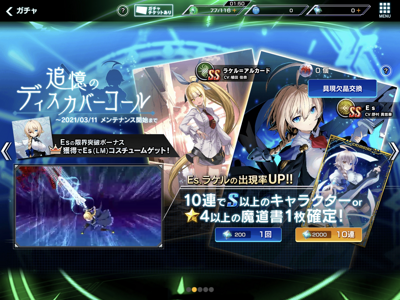 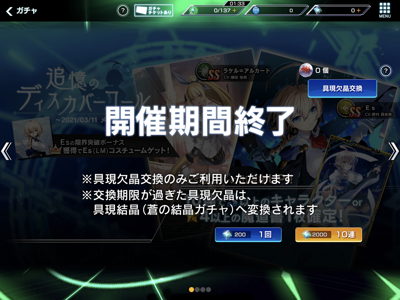 The limited-time Recollected Discover Call Gacha after its expiration

Crystallized Azure
or, in the case of the Friend Point Gacha,

Friend Point
s. One roll costs either 200 Crystallized Azure or 200 Friend Points, and there is an option to spend 2000 at once to perform ten consecutive rolls in one go (a "10-roll" or "ten-roll"). When rolling ten at once, the gacha guarantees that one of the ten items pulled will be either an S-or-higher-rarity character or a 4-star-or-above grimoire. 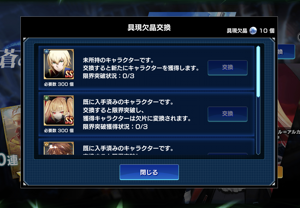 The Embodiment Coin Exchange for the Crystallized Azure Gacha

Coins for time-limited gacha can still be exchanged after the expiration of the gacha for a limited period of time. After that time period ends, any leftover coins will be changed into Embodiment Coins for the Crystallized Azure Gacha.

The Tutorial Gacha can be rolled infinitely with the caveat that only one ten-roll can be redeemed. After rolling a ten-roll in such a gacha, there will be two options: one to accept the current roll, and one to reject the current roll and reroll. The gacha disappears and cannot be rolled again after a ten-roll from it has been accepted.

The Friend Point Gacha can be rolled using

Friend Point
s instead of Crystallized Azure, and has a unique pool of possible rewards including low-rarity grimoires, items like orbs and EXP crystals, and the Friend Point Gacha-exclusive character Spirit Body Terumi.