Yuuki Terumi, in reality the God Susano'o, is the main antagonist of the BlazBlue series. He is a cruel spirit who lusts for the destruction of everything he touches, relentlessly murdering and torturing those who cross him. He founded both the Novus Orbis Librarium and Sector Seven and was responsible for the incident that ruins Ragna's life.

Terumi first appeared as an NPC in BlazBlue: Calamity Trigger while he possessed Hazama. It was not until BlazBlue: Chrono Phantasma that he finally became playable as an independent character.

When the war loomed towards its apex, Terumi saw Iron Tager entering the area where the Prime Field Devices had been kept. [1]

Terumi barely survived his encounter with Hakumen. The body Trinity made for him died, but he was able to survive through crudely Observing himself, although this method would only keep him sustained for a week at most. He began searching for another vessel.

He found Hazama, explained what had happened, and through him, ordered that Noel go to the Kaka Village to deal with Ragna. [2] He stayed with Hazama, barely being able to possess him, and watched as Nu battled against both Ragna and Noel. [3] Not long afterwards, he was transported to Ikaruga, and told by Nine that he could obtain the Azure by killing Izanami. Although Hazama had told him that he would search for the Azure himself so they could fuse, Terumi began to search for a different vessel to fuse with, finding that he had outgrown him. [4] Hazama had fulfilled his side of the deal, however, and had gained an Azure piece from Izanami – he told Terumi he wanted to fuse, but to be in control, and he complied. [5]

Going to the Alucard Castle, Terumi pried open Clavis’ coffin after battling through the Prototype Absolute Defence: Blade of Reflections, which created a perfect copy of himself to fight. Winning, he took the Hihiirokane within, [6] and used to separate himself permanently from Hazama when his former vessel tried to consume him. Terumi then absorbed the weapon into himself and left Hazama to his own devices. [7] He drove Nu insane after she was defeated by Ragna, forcing her to fight Hakumen. While the knight was distracted, Terumi launched Hihiirokane at him, shattering his soul and taking over the Susano’o Unit, finally becoming Susano’o once more. He snatched Noel and Amaterasu, forcing them outside of the Embryo. [8] 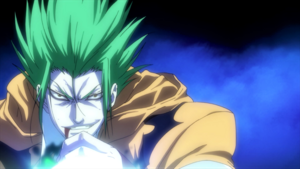 The death of a god

Terumi exited and returned to the unit frequently, being able to now summon it at will. At the gate with Noel in his grasp, Terumi battled against Es, the protector using the Susano’o Unit to do so. Amaterasu had Observed his victory before the battle even began. [9] Soon Ragna and Jin arrived, and through their combined efforts, sent Terumi out of the Susano’o Unit. He was sent inside the Gate with Ragna by Noel, coming to the Azure Horizon. [10] He fought his nemesis for the True Azure, and lost, finally dying after having cheated death countless times. [11]

One of the Six Heroes that defeated the Black Beast, and the true identity behind the man who occupies Hazama. Incidentally, he also created the Azure Grimoire, which is what caused the Black Beast’s appearance.

He attacked the church where Ragna, Jin and Saya sought refuge, and gravely wounds Ragna in the process. He kills the Sister, and takes Jin and Saya with him, throwing Ragna into a pit of despair.

He might look like a nutcase form the outside, but there is a meaning behind his actions and he is quite clever. We are dealing with a man who simply lives for the destruction and screams of his victims.

During the Dark War, he loses his flesh upon the revival of the Black Beast but is then able to conceal himself in the body of Kazuma Kval, thanks to Relius’s careful tactics.

After being restrained by Valkenhayn, he is confined inside the Alucard Manor. But is freed when the Black Beast runs rampant by the hands of Nine, who regards his knowledge to high standards. He is kept under control of her spell.

With his cunning and ability to manipulate people, Terumi pulls the strings from behind the curtains, aiding in the establishment of both the NOL and Sector Seven. Furthermore, he kills or nullifies half of the Six Heroes with his own hands. He is sealed away only at the hands of Jubei and Hakumen…combined. Currently, Takamagahara’s system allows him to exist in the human realm, albeit only mentally.

After, he forces Noel, who now has the Eyes of the Azure, to acknowledge his presence, binding his exsistance into the realm as we know it. He has revived, completely.

Since, he still uses Hazama’s body, and carries out his missions alongside Relius and the Imperator. But, he is once more torn by Trinity’s mental attack using Muchorin’s powers.[12]