13 years before the Embryo Incident, Ripper broke into Yuki's family's house and brutally killed her parents in front of her, forcing her to hide under their corpses. When Ripper was about to kill her, Kazuto Kotetsu arrived to save her, shooting Ripper. 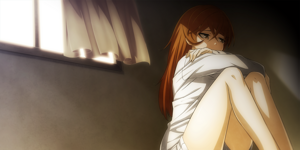 3 years later, Yuki was living at an orphanage. She locked herself in her room away from the rest of the world. Avenge came to her and asked her a favor; asking her to act as Hinata Himezuru's older sister. Hinata's happiness and optimism, despite all she had been through, broke Yuki out of her depression.

After leaving the orphanage upon growing up, Yuki dedicated herself to studying medicine. Once she became a doctor, she took in Touya Kagari and Hinata. 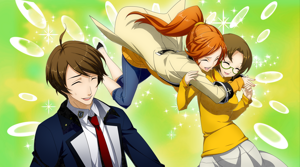 When Yuki was finally able to come home she immediately jumped and hugged Hinata as soon as she walked in the door. When she saw Es she did the same to her, which confused the girl on the receiving end of such affection. [1] She then told Touya that the Mitsurugi Agency was a major benefactor of her hospital and Souichiro Unomaru told her about Es becoming Touya's bodyguard. Yuki said she had no problem with Es staying with them since she wanted her house to be happy and full of cheer. After having dinner, she went to take a bath, but not before teasing Touya about joining her. [2]

A few days later at dinner, she and Akira Kamewari got into a fight over the beef. She promised to take everyone to the pool the next day. The next day at the pool, she teased Touya about the fact that he had so many friends who are girls. [3]

One night, she wondered why no one responded when she said she'd be coming home. She was then approached by Avenge and called him Kotetsu. He told her to take her family and leave the city because something similar to “that day” would probably happen again before leaving. Once she arrived home she found Touya, who made coffee for her. He confided in her that he put Hinata in danger and was being a burden to her but she denied this, saying Hinata would be fine.

The next morning, Hinata woke up fine, having been asleep through the entire event. She told Touya that Es was worried about him and stayed outside his room the entire night, but he quickly left. Yuki found it strange that Touya was actually mad and asked Es if they had a fight. Seeing Es looking sad, Yuki realized she wanted to make up with him, but Es didn't know what that meant. Yuki explained that it meant she wanted Touya to like her again and Es asked how to do that, but Yuki said Es would have to figure it out on her own, calling Es an adorable little sister. Es said she was not part of their family, but Hinata said she still thought of Es as a little sister regardless, which Es did not understand. [4] However, Es wanted to be part of their family, but Hinata and Yuki said she already was an important part of their lives. Es was horrified that she nearly made a terrible mistake and didn't want to lose her family so Hinata told her she wasn't going anywhere. Yuki told Es to tell Touya the same thing if she wanted him to like her again and Es thanked her and left. Hinata then wondered what happened and Yuki theorized that it was because both Touya and Es were awkward and there was a disconnect between their words and actions. Hinata asked what to do about it and Yuki said all one could do was like themselves. [5] That night on the roof of the hospital, Yuki thought about Akira being a Union and wondered if everything was connected to the Wadatsumi Incident and if Touya and Hinata were involved. She decided to look into Hinata's past and that she could get answers from Avenge.

The next day at Shin Yokozaki University Hospital, Hinata came running to her, having heard that Akira was in an accident. Yuki hugged Hinata, telling her that Akira would be fine and she needed to not look so sad. Inside, she ran into Mei Amanohokosaka, who had just visited her father. Mei asked Yuki to explain the situation to Touya when he arrived. Mei took Yuki to the roof and told her she could get in touch with Avenge for her. Mei promised to tell Yuki what she knew, but warned her that it involved the incident 13 years ago. Mei told Yuki the story behind her parents' murder, how Avenge saved her and that Ripper survived, but it was covered up since he was a Union. Mei then asked about Hinata, wanting to know who she was since Yuki was an only child. However, Yuki said that Hinata was absolutely her younger sister, regardless of blood connections. She then told Mei the story of how she met Hinata. Mei warned Yuki that she shouldn't meet with Avenge but Yuki said she had to in order to learn about Hinata's past. Mei relented and said she'd get in touch with him for her. Yuki then went to meet Avenge. Yuki apologized for tricking him by telling him it was for a job. Avenge said it was fine since he owed the Amanohokosaka clan a favor, but then remembered he already repaid the debt. Yuki asked him about Hinata's past. Avenge said she shouldn't ask because she would be getting involved, but Yuki was adamant that she needed to know if something dangerous was happening so she wouldn't lose another family and Avenge gave in. After moving to a safer location, Avenge said that Hinata was a Wadatsumi survivor and was likely connected to the event, confirming Yuki's suspicions based on the dream Hinata had told her about. He then told her about how, at Sui Amanohokosaka's request, he had received Hinata from a dying Ryouko Kagari and brought her to Yuki. Avenge apologized for not getting Hinata's name, but Yuki thanked him for it since she was able to name her herself, explaining how Hinata saved her from her depression. Yuki then asked Avenge how long he planned to continue on as “Avenge” and Avenge replied that he hadn't avenged anything yet. He once again told her to leave the city since an event worse than the Wadatsumi Incident could happen and Touya was at the center of it. However, he said he would help them. Yuki said that next time they met they should all go out for barbecue and that she would introduce Avenge as Touya's father. Avenge then left. [6] Once Touya arrived at the hospital, Yuki learned that he was aware of the Union outbreak and she told him about Akira's condition. Later she saw Kuon Glamred Stroheim running out of Akira's room and asked Touya if she was heading home and he lied to her that it was true. He then said he had to go and apologized to Yuki, which confused her. [7]

The next night, Yuki called Touya. Yuki said she couldn't come home that night but she had some good news before giving the phone to Akira. After taking the phone back, Yuki told Touya that Akira was fine but his rehabilitation was going to be hell. Touya said they needed to have dinner together again soon and Yuki said of course they would since they're family and hung up. [8]

One month after the Embryo incident at the Himezuru residence, Yuki was there when Kuon said she needed to leave to return to Ishana. Hinata was sad, but Kuon said she would definitely visit. Kuon thanked Touya for everything, saying that even if she lost her brother, she would treasure the days she spent with him and the others. Yuki started teasing Touya about Kuon but was disappointed to find out Touya just asked Kuon to do him a favor. Kuon then left. [9]

Yuki later ran into Touya in the hallway of the hospital after he ran out due to hearing a Discover Call. Yuki asked why he was in a rush and when he said it was for something only he could do, she told him to get going so he ran off. [10]

One month later, Touya and Hinata greeted Yuki in the hospital and Hinata asked about Akira's condition. Yuki said he'd started walking and was slowly getting better and it was okay for them to visit him. Yuki told him that since he was scheduled for rehab he was probably in the garden. [11]

A month after the Embryo Incident, Yuki's life had returned to some semblance of normality. She continued to treat Unions, and monitored Akira while he was in hospital.[12] She was present for Kuon's last day in Japan. She teased the mage, claiming that she could sense a hidden romance between her and Touya, although she was wrong.[13] She bumped into Touya one day in the hospital after he visited Akira, and knew that he would have to do his own thing. Yuki left him to his duty. [14] At some point, she began privately tutoring Akira so that he could pursue his dream of becoming a doctor.

During one of these tutoring sessions, Akira told Yuki that Touya and Hinata had taken in a young girl called Es into their home, that she was suffering from amnesia, and that she was currently having an appointment in the hospital. Yuki, who had her memories altered to no longer remember Es, interrupted the appointment and offered Es a room in the Himezuru residence until her memories returned. Es agreed and outside, she told Yuki that she had a flash of memory where she remembered accepted into the Himezuru's as “family”. Although Yuki could not remember this, she extended the invitation once again.[15]

Es fainted in the Himezuru residence a few days later. Both Yuki and Hinata looked after her while she was unconscious. Although initially sceptical, Es managed to convince them both that she would be fit enough for her welcoming party in the evening. In that evening, Yuki took dinner seriously, viciously fighting for any piece of meat in the hotpot. [16] The following morning, she had breakfast with her family but she couldn't help but express her concern for Es' wellbeing.[17]

The following day, Yuki treated Hinata and Es to an expenses paid shopping trip. She quickly got Akira to act as their busboy as they went from store to store to purchase whatever clothes they fancied.[18] Later that evening, Yuki learned from Hinata that Es had followed Touya on a mission to hunt down a Union. Worried, she, Hinata, and Akira desperately searched Shin Yokozaki for them both. Yuki left a voice message for Mei explaining the situation. Once they had begun to give up hope, as they were unable to enter the Restricted Ward, Mei called Yuki back to let her know that she was on her way. [19] Es and Touya returned home. As the weeks continued, Yuki continued to tutor both Hinata and Akira.[20]