Eat Beat: Dead Spike-san (イートビート デッドスパイクさん) is a rhythm game released for Android and iOS in 2015. It also received a port on the Nintendo Switch in 2018 which included all of the DLC characters, costumes, and songs with the base package.

Once upon a time, in an unnamed Hierarchical City, was Ragna and Dead Spike-san. Ragna, as hard as he fought, never seemed to win...

Dead Spike-san, witnessing defeat after defeat, had a bright idea. If he ate more, maybe he could become stronger...? Dead Spike-san and Ragna set off on an epic(?) journey.[5]

The controls are simple -- tap the screen to the beat, when food passes by. The more Dead Spike-san eats, the more he grows![6][7] 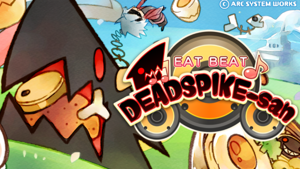 The game is a simple two-button rhythm game. Dead Spike sits on the left of the screen as food slides in from the right of the screen, accompanied by a band of orange or blue beneath it. Tap or tap and hold the corresponding L or R button when the food reaches Dead Spike to command Dead Spike to eat it. Help Dead Spike-san eat food to the beat of music to rack up points and grow stronger.

As you eat food, the Overdrive gauge at the bottom slowly fills up. When it is full, you can tap to activate Overdrive mode. In Overdrive, any food Dead Spike eats will provide more points than usual.

The tutorial gives the following instructions:

There exists one review for Eat Beat, and it's a positive one. Rice Digital called it "interesting," saying that Arc System Works has a charm when creating rhythm-based games. [8] The Android App store has the game listed as 4.1/5.0 by users, and on the Apple store, it is rated 4.7/5.0. [6][7]